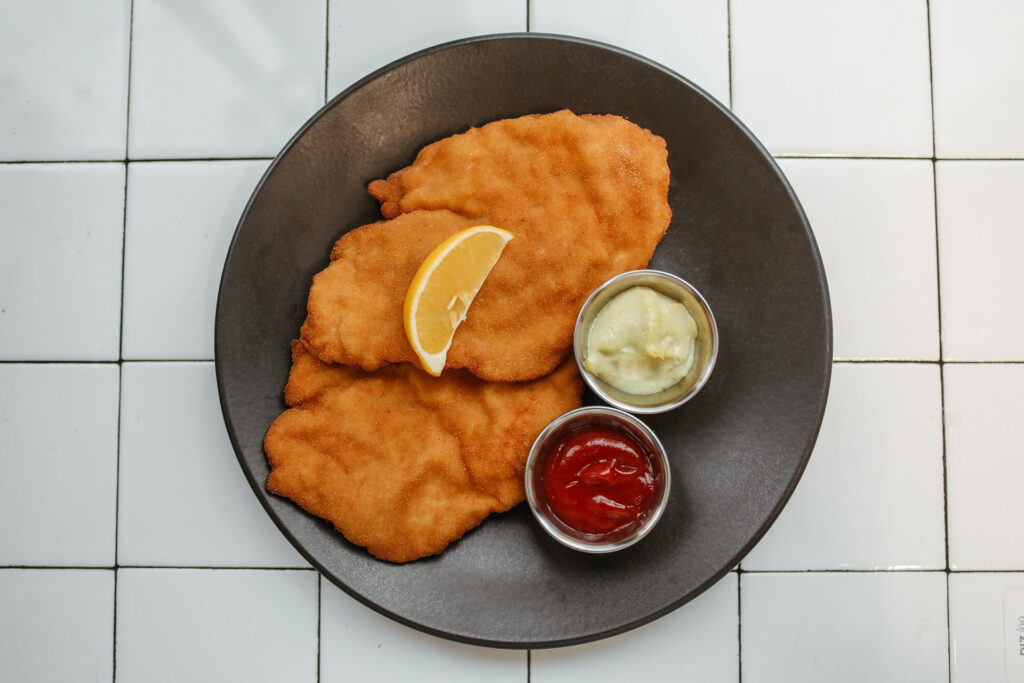 What is a Schnitzel?

Many are familiar with the term schnitzel, but fewer people know precisely what a schnitzel is, and even fewer know its history. Schnitzel is heavily associated with Germany and Austria, where the dish is ingrained into the national identity. However, schnitzel is enjoyed worldwide in different countries that have all put a unique cultural stamp on it.

What Exactly is a Schnitzel?

A schnitzel is a fried meat cutlet made from veal, pork, chicken, or turkey. The cutlet, usually boneless, is pounded into a thin slice to tenderize the meat and help it cook evenly. It’s then breaded and deep-fried or pan-fried, giving the schnitzel its famous crispy and golden outer layer.

Schnitzel is found throughout Europe, predominantly in Germany and Austria, where it has deep cultural roots. The name schnitzel comes from the German word “sniz,” meaning “slice.” That said, it’s not hard to find schnitzel in restaurants all across the continent.

Traditionally, schnitzel is served plain, garnished with lemon and parsley, accompanied by a starch, like fries, potato salad, or spätzle, a type of German dumpling. Additionally, a vegetable dish like salad or green beans may be served alongside the schnitzel.

Schnitzel is also commonly topped with a sauce, usually mushroom or cream-based. And nowadays, schnitzel is even incorporated into fusion dishes like schnitzel parmigiana, Mexican schnitzel, and Greek-style schnitzel.

Schnitzel’s exact origins are somewhat hazy. But legend has it that a Kaiser named Basileios started a trend of eating gold-coated meat. This habit soon became too expensive, and the solution was to use breadcrumbs to help give the meat a golden outer layer. This far-out theory places schnitzel as far back as the 9th century Byzantine Empire.

How Many Types of Schnitzel are There?

For the most part, all schnitzel follows some variation of the same recipe, with different cuts of meat and different toppings.

Popular serving styles for schnitzels include:

Additionally, schnitzel may be served in a sandwich or a wrap, with toppings like tomatoes, lettuce, and onions.

Do Different Countries Have Different Schnitzels?

Several countries have their own take on schnitzel, sometimes with strict laws regulating the recipe.

Austria is home to the wiener schnitzel, which takes its name from its city of origin, Vienna—“wiener” means “Viennese” or “from Vienna.” Wiener schnitzel is almost identical to German schnitzel in flavor and appearance.

Although it’s Austria’s national dish, wiener schnitzel may actually come from Italy. It’s said that schnitzel reached Austria in the 1800s when an Austrian general brought the recipe back after trying veal cutlets in Milan. The recipe was introduced in Vienna, where it became the cutlet we now know as wiener schnitzel.

Although European in origin, schnitzel is now an integral part of Israeli cuisine. Schnitzel made its way to Israel shortly after the nation’s founding in 1948.

During this time, veal was not widely available, so schnitzel was made with chicken or turkey instead, falling in line with Kashrut, a set of Jewish dietary laws. Butter in the original recipe is often swapped out for oil to keep the meal kosher, and the schnitzel is often spiced with paprika or sesame seeds.

To this day, chicken schnitzel is a famed part of Israeli cuisine.

Several more countries around the world have their own versions of schnitzel. Schnitzel is popular in South Africa and Namibia due to their history of German colonialism. And in Australia, schnitzel is a popular pub food often known by its nickname, “schnitty.” Today, it seems more countries than not have some adaptation of this fried meat cutlet.